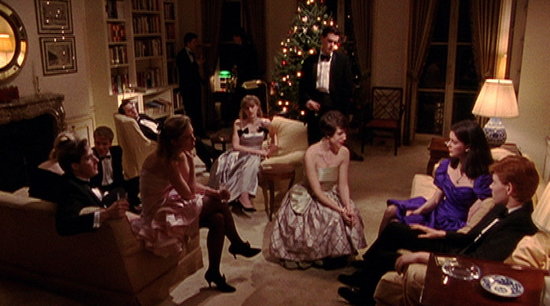 Metropolitan is a holiday comedy of manners released in 1990, and is the first movie in Whit Stillman’s “Doomed-Bourgeois-in-Love” series. It feels like an upscale John Hughes-does-Clerks in New York kind of thing. The dialogue is snappy and the pacing of the movie is perfect; never a down moment but somehow the film feels atmospheric.

The script makes the characters, preppy first year college students, endearingly precocious and insightful but equally snobbish-but-well-meaning and inexperienced in a way that’s entertaining and funny. The romantic angle of the movie is novel and the lead girl, Audrey Rouget, is near perfect.

I’m amazed that more people haven’t heard of this movie.

The sort-of sequel, The Last Days of Disco comes recommended. I’ve watched the second in the series, Barcelona, but it didn’t really leave an impression.